July 10 2021 is the first ever International Glut1 Awareness Day.

In recognition of this inaugural event, and to help raise awareness of this rare disease, we welcome guest blogger Trudy Morgan, European Outreach Director Glut1 Deficiency Foundation and Chair, Glut1 Deficiency UK to talk about her personal discovery of Glut1 deficiency syndrome. 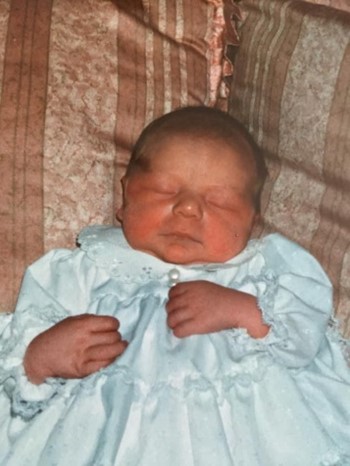 On 15th November 1995, my long awaited second child Cleo was born, a normal, easy birth delivered on her due date. As a loving family we were so happy to bring Cleo home. Her big brother was 8 years old and excited to have a sister, he took on his big brother duties well.

Cleo was a restless baby who was breastfed frequently and on demand. She never settled for very long. At the age of 8 weeks, we noticed what was to be Cleo’s very first symptoms of Glut1 deficiency syndrome (Glut1DS) which included: vacant looks (absence seizures), odd arm twitches (myoclonic jerks) and abnormal eye movements (aberrant gaze saccades). This was an uncertain time for us as a family.

As a mother I recognised Cleo’s symptoms were unusual but naively I wasn’t overly concerned. I had assumed medication would solve the problem if this was required.

When Cleo was 7 months old, we were referred by our local GP to a Paediatrician. At this time, her general development seemed to be on target, she was sitting, crawling and cruising at 9 months and able to walk unaided at 15 months. Cleo’s Paediatrician seemed to draw a blank when I explained these unusual episodes, until he witnessed an abnormal eye movement at a clinic appointment. Cleo was then referred to a Neurologist at the University Hospital Wales, in July 1997.

Cleo was noted to have developed a complex movement disorder, these episodes were longer and easier to video tape for medical reference. She appeared wobbly, fell over frequently and became floppy. In opposition, she also had bouts of spasticity where her limbs became stiff. She had problems with controlling all movement when these episodes occurred. Seizures presented as absences, myoclonic jerks, tonic clonic seizures, speech arrest, none of which responded to anti-epileptic drugs. Episodic symptoms seemed to be getting worse and were affecting her daily, head drops had become routine on waking, ataxia, spasticity, hypotonia, hemiplegia and tremor which became worse when triggered by exercise, hunger, illness or excitement. She was generally very lethargic, continually tired and falling asleep and her concentration was limited.

The earlier naivety I had once felt had, by this time, been replaced by a stark fear of the unknown. Cleo’s symptoms were unusual to us and frightening. Our medical team were running tests to eliminate possible life-limiting conditions.

At Cleo’s routine 2.5 years assessment, speech and language skills were reported to be below the referral line for therapy, manipulative and self-care skills were also below, which led to a referral for Physiotherapy, Occupational, and Speech Therapy. We were drawing blanks for a confirmed diagnosis and needed a second opinion.

At this time a referral was made to Great Ormond Street Hospital London, where they concurred with Cleo’s local consultant that Cleo had a likely ion channel disorder, but it was a vague diagnosis with no further treatment options. This explanation of Cleo’s symptoms and events leaves out the worry and heartbreak that goes with living with an undiagnosed incorrect medical condition. The drug trials that don’t help, the hospital admissions, EEGs, MRI scans, endless tests leave an indelible mark on the family.

We carried it well but as I write this some 20 years later the feelings haven’t left, I can still locate the fear I felt in my stomach to this day “what was wrong with my little girl? “...We lived each day alongside the unpredictability of symptoms, we tried to manage the special occasions that always seemed blighted by extra symptom breakthrough.

Then we had a change of fortune. Cleo’s Neurologist retired and her new Neurologist Dr Sandeep Jayawant wanted Cleo to be tested for a rare medical condition called Glut1DS. Eventually a lumbar puncture was performed showing hypoglycorrhachia and our samples were sent for a glucose uptake assay to Prof. Dr Joerg Klepper who practiced in Germany. This led to a confirmed diagnosis of Glut1DS on 13th December 2002, when Cleo was 7 years old. We had finally turned a corner with a diagnosis.

I cannot understate the relief we felt as a family to finally have a path that provided direction when, until now, we had felt vulnerable and adrift. 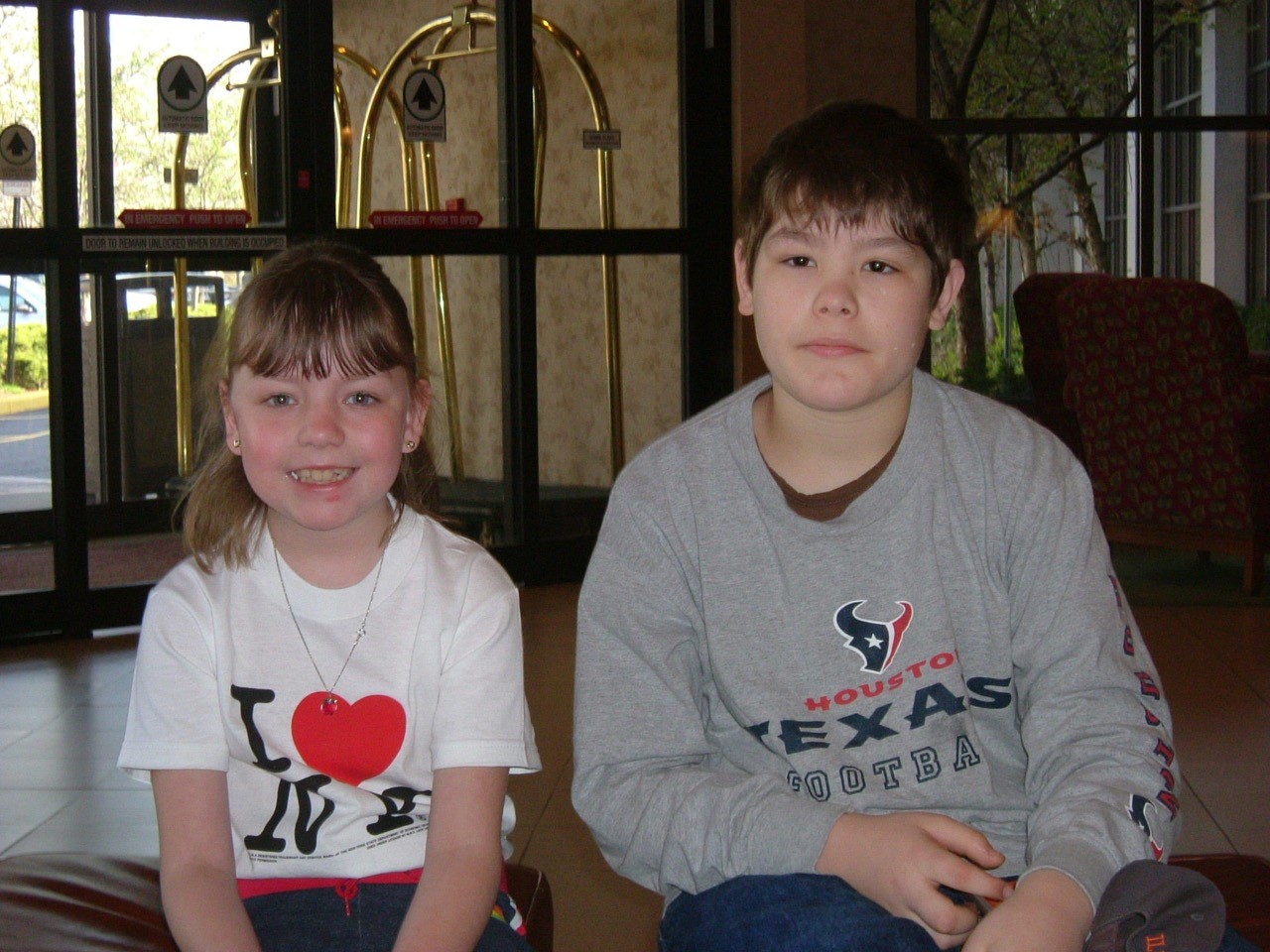 The relief of a diagnosis

With a diagnosis, knowledge, services and support open up, along with one of the most comforting aspects which is the connection to other families who share the diagnosis. From there we were advised the treatment was the ketogenic diet which they said would be difficult, or to supplement Cleo’s regular diet with corn starch, in theory to push carbohydrate and increase energy. Our hospital had little knowledge of the diet at that time and even less of Glut1DS. Our first attempt with the ketogenic diet transition was difficult. We were admitted to hospital for a three day stay, the food choices were extremely limited, and Cleo’s symptoms became uncontrollable in the transition phase between reducing glucose and not producing ketones. Our medical team advised us to stop the initiation of the ketogenic diet due to Cleo’s severe reaction and instead supplement Cleo’s normal diet with corn starch which proved to have very little help with symptoms.

We wanted support with the new diagnosis and found it in the charity formerly named C.L.I.M.B, now Metabolic Support UK. At that time there were no other UK families that had been diagnosed with Glut1DS.

We searched the internet and made contact with Dr De Vivo and Kristin Engelstad at The Neurological Institute of New York Columbia University Irving Medical Centre, New York, who invited us in April 2005 to take part in a Glut1DS research project. This led to identifying Cleo’s missense mutation T1371, not identified in either parent. It was a huge privilege to meet with Dr De Vivo and his team. They helped us understand the diagnosis of Glut1DS and with their encouragement we left feeling we must try to initiate the ketogenic diet again, this time being more prepared through the knowledge we had gained. Our other real milestone of the trip was meeting our first ever family who shared Cleo’s diagnosis, it was an absolute pleasure to meet Matt Rizzo and Janet Bean - we continue our friendship to this day.

On returning from the U.S.A we began making referral to start the ketogenic diet once more. Two weeks short of Cleo’s 8th Birthday we initiated the ketogenic diet at home, this time with full medical dietician support. The transition was very smooth in comparison to the first trial, Cleo produced ketones quickly and the results were miraculous, to this day it astounds me how a ketogenic diet can have such a positive impact on symptoms. I would encourage anyone with doubts to get support from your medical team and ketogenic services to give your child the chance of improved quality of life. Cleo continues to use the ketogenic diet as the best form of treatment to control her symptoms, we are forever grateful for its positive effects.

Puberty was a particularly difficult time and unfortunately the diet has never been as effective since. We have explored alternative options to help regulate Cleo’s hormones and monthly cycle including various contraceptive pills and the contraceptive implant and we have found the Merina coil to be of some help.

New cycles of symptoms continue to come and go, strange itching sensations in hands, a numb tongue, abnormal facial movements, PED (paroxysmal exercise-induced dyskinesia), athetosis (involuntary twisting and writhing movements), dysarthria (unclear speech articulation), dystonia (involuntary muscle contractions that lead to abnormal posture and movements). Pain and cyclic vomiting persist to this day and these are the particularly difficult symptoms to witness as a family. Cleo’s determination to handle these episodes is inspirational. 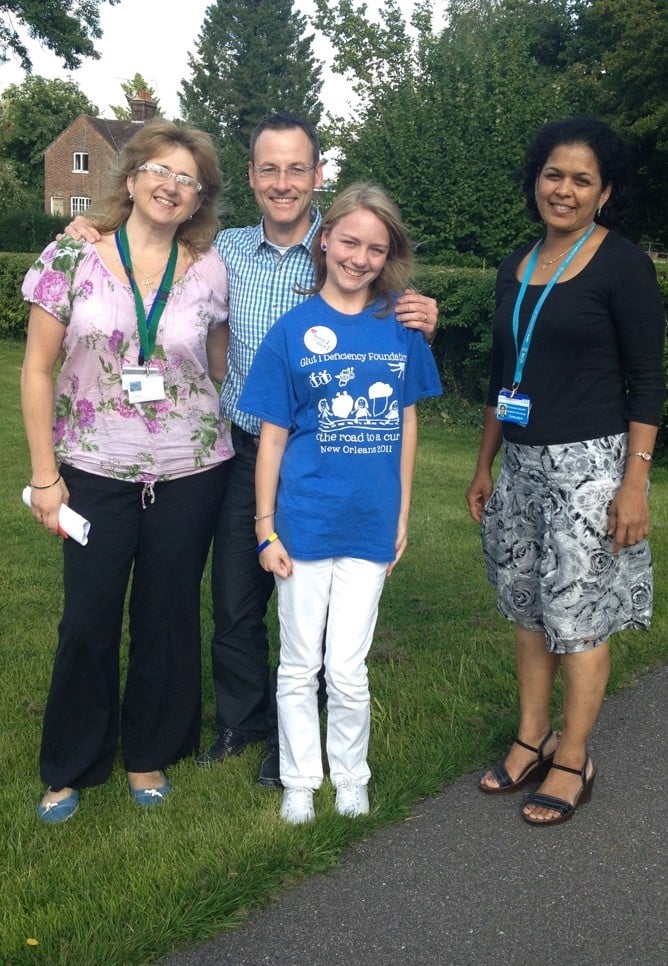 In August 2013 at one of these events we combined a private clinic appointment at Matthew’s Friends Clinics with Dr Klepper. We discussed the difficulties Cleo was having with symptom control, ketone production and puberty. He suggested as a family we gain knowledge around the possibility of Cleo having a gastrointestinal tube to aid ketone production and independence. We went home and thought long and hard about the decision and we concluded that it needed to be one Cleo would ultimately make. This was a difficult decision for Cleo as a young woman, however we believed we had tried every option possible to tweak Cleo’s oral diet and gain back stability. Ultimately her strength of character and ‘get on with it’ attitude made her decide she had nothing to lose.

At the age of 22 years, in February 2018, Cleo had the procedure for a PEG (percutaneous endoscopic gastrostomy). Since the procedure we have gained good ketone production and Cleo is able to manage her dietary requirements independently when well.

Unfortunately, Cleo continues to struggle with absence seizures, nausea and vomiting, which is an ongoing problem for her and her medical team. We have formed a wonderful relationship with Cleo’s Neurologist at UHW Dr Johann te Water Naude and the Dietitian team at Bristol Southmead Hospital who form the foundation of her treatment and care.

Growing up with Glut1 Deficiency

Cleo’s education from Nursery to College was met in mainstream with a full time 1 to 1 learning support assistant (LSA). Education brings with it another set of difficulties but overall, Cleo enjoyed the company of the other students and she made some particularly strong relationships with her LSAs over the years who provided support and kindness.

Cleo is a social young woman who loves being with people, she is strong and direct, she also enjoys time alone watching her favourite tv programmes and catching up on social media.

As her mum I am astounded by her resilience and I am so proud of the woman she has become - she never gives up! This is merely an account of dates, symptoms and events - Cleo is far more than this description. 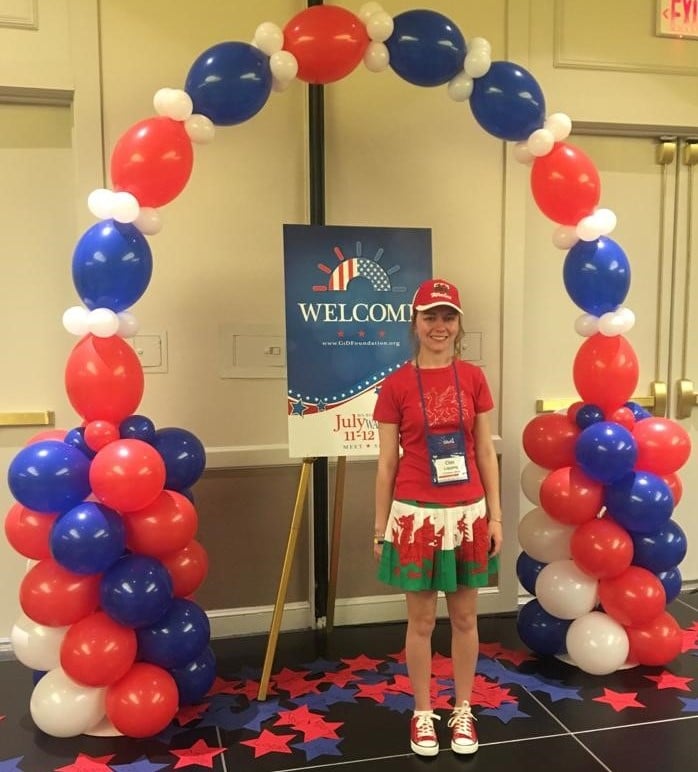 We are fortunate to have medical experts working on behalf of our Glut1DS community. We hope with new breakthroughs in research alternative treatments will be found. We regularly join the G1DF zoom meetings where Cleo has found support and fun amongst her peers and I have found friendship and connection through volunteering with Glut1 Deficiency UK and the Glut1 Deficiency Foundation.

For many years, families dealing with a Glut1DS diagnosis have depended on the valuable support from both the Glut1 Deficiency Foundation in the USA and from Matthew’s Friends Ketogenic Dietary Therapies Charity based in the UK and Ireland. Both charities have helped bring families together to share experiences and meet with Glut1 Deficiency experts from around the world.

We are dedicated to improving the lives of those in the Glut1 community through our mission of:

Support for rare disease patients and their families