How we learnt about Menkes Syndrome

For our latest patient guest blog, we welcome Daniel DeFabio, Co-Founder of DISORDER: The Rare Disease Film Festival. Daniel and his wife Tina lost their eldest son Lucas when he was 11 years old to Menkes Syndrome, a very rare genetic disorder. Here Daniel shares his story. 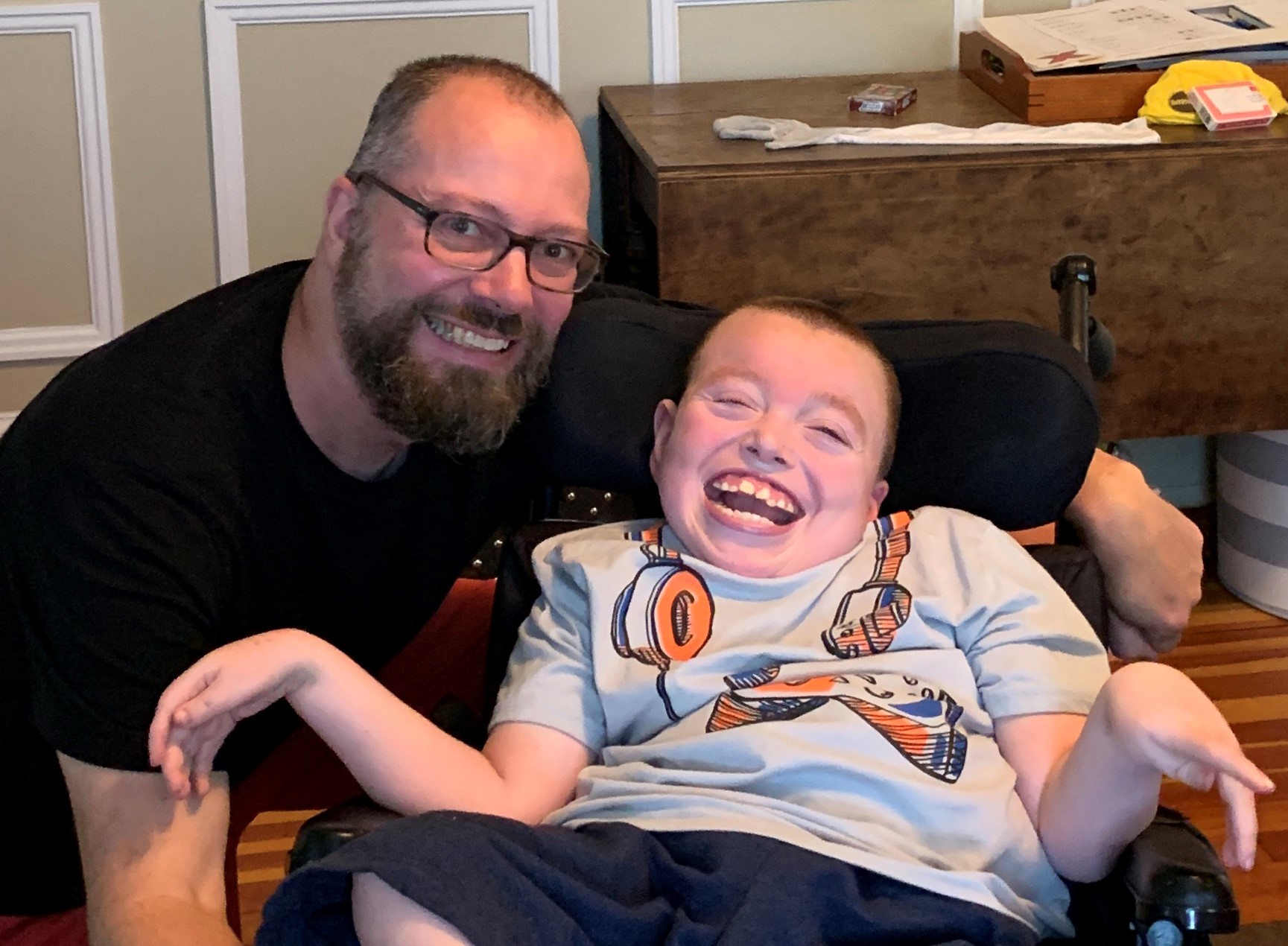 When our first child was born, I happily declared with relief “ten fingers, ten toes”. A phrase I have since come to consider absurdly trite if not dangerously dismissive. I have become far too familiar with the myriad ways a person can have severe health complications despite presenting with a “typically healthy” body.

And even on that score, if we were looking with our eyes ‘wide open’ we could have seen at least one atypical physical symptom. Perhaps unrelated, perhaps a warning sign, Lucas was born with a triangular fracture at the base of his skull. The doctors around us tried to mask their alarm. Lucas' mom and I were probably not alone in wondering if someone had dropped our boy when he was out of our sight. We were taken by ambulance from the small women's birthing hospital to a larger hospital so he could be examined by neurology and we were admitted to the NICU (Neonatal Intensive Care Unit) for the next 10 days.

The most urgent concern was to determine if the skull fracture had caused a brain bleed or similar damage. After a few days, thankfully, this was ruled out. It would be 12 months later that we'd learn Lucas had Menkes Syndrome. A condition that can include fragile bones. Further, Menkes Syndrome has a related disorder which affects older kids called Occipital Horn Syndrome. The fact that Luke's fracture was in this location was too much for me to allow as coincidence. But more medically trained minds than mine assured me the fracture had no connection to Occipital Horn Syndrome.

In hindsight, perhaps the worst element of those first two weeks of Lucas' life was that we would later learn that there is a largely effective treatment for Menkes Syndrome – if it is administered in the first ten days of life. For Lucas those ten days were spent in the right place, a NICU, with the right specialists examining him. But as with so many rare diseases, too few doctors know the signs to look for. Menkes Syndrome is also known as Kinky Hair Syndrome. Perhaps this name is used less commonly since it can seem silly, but it's a useful reminder of one of the few early observable symptoms. Boys with Menkes have twisted, brittle hair, which breaks away creating bald spots.

Most other symptoms are slower to emerge. Things like developmental delay, which we saw at four months in our son. But we (and our doctors) dismissed them as understandable given his recovery from the skull fracture. It wasn't until nine months, when his limited skills began to regress, that we sought a genetic diagnosis. Menkes Syndrome is ultra-rare – there are about 68 living patients that we know of - so we were fortunate that our geneticist had seen two previous cases of Menkes. On the first visit, after he touched Lucas' hair, he said he'd be ordering genetic testing for copper metabolism disorders.

Notice I used the word fortunate above? It's so odd to consider anything that leads to a prognosis of your child living three - ten years as being fortunate. But as we've become immersed in the world of rare disease kids and their parents, we've learned there is a different and often worse suffering in not getting a diagnosis or having your diagnostic odyssey stretch out for many years. Lucas was diagnosed at 12 months. A mutation of the ATP7A gene meant he was not transporting and metabolizing copper sufficiently. Without enough copper, the brain, muscles and hair don't develop correctly. And the dietary copper that is not used correctly begins to build up in the kidneys and liver, creating damage there.

And I'm not listing the early clues we missed to beat myself up with second guessing. It's more my hope that maybe some future family will be better informed by this and catch some markers that might get them to diagnosis and treatment in the critical 10-day window.

If so, for many of them, they'll be able to get copper injections and their boys can go on to longer, healthier lives, into their twenties or thirties. Some of them will even be fairly close to our ideas of “typically healthy”.

For Lucas, he did get the copper injections through a clinical trial at the NIH. But since he was starting at age one, they had lesser or no beneficial effects. It is hard to say for sure. We've learned it's pointless to compare Lucas with other kids, even others with Menkes. But we were always comforted by how happy, smiley and laughy our bright-eyed boy was. He never, talked, walked, sat unassisted or took food by mouth but he sparkled and shined more than most people I know. From the earliest days we asked ourselves –proud parents-- how we got so lucky as to have the greatest boy in the world for our son.

Seizures are indicated for boys with Menkes, but we never saw them in Lucas. Unless perhaps there were absence seizures mild enough for us to miss or dismiss. Some Menkes boys lose their sight. Luke's eyes were keen and active. Should any of these “fortunate” outcomes be credited to the copper injections? Hard to judge.

We didn't know when we chose his name (after Star Wars) that Lucas meant “bringer of light”. But that fit him perfectly. Lucas' life was short. He passed away a year ago at age 11 and ½. But he packed more happiness and I think more positive impact on others than many people accomplish with 80 or more years. He certainly changed his mom, his brother and me. We are all so much the better for having shared his briefer, brighter life.

Support for rare disease patients and their families